Programming languages are used in many areas of information technology – web development, machine learning, databases, etc. In 2022, knowledge of programming languages, as well as the ability to use them, are exactly the skills that employers are looking for in the IT market. However, software development is constantly evolving, so it is important for every specialist to be aware of all current trends. In this article, we will talk about programming languages that will be popular in 2022.

Statistics for 2019 show that JavaScript has become the most popular language (69.7%). With JavaScript, encoders can create dynamic web elements such as animated graphics, interactive maps, clickable buttons and more. The language is used both for the front end and for the back end. Developers like JavaScript because of its interoperability with the famous Vue, Node and React frameworks. Most likely, JavaScript will continue to dominate other programming languages in 2022, given the number of websites that rely heavily on JavaScript.

Python is the best programming language for beginners. It has a simple syntax that is easy to understand and use. It is widely used in web development, system programming and many other areas. With Python, you can create programs with a graphical interface, system and scientific applications, command line utilities, games, etc. Django, Flask and Pyramid are the main Python frameworks that make it easy and convenient.

HTML is a HyperText Markup Language. It is responsible for formatting the appearance of information on a website. It does not have the same functionality as other programming languages in this list and is limited to creating and structuring text on the site. Sections, headings, links, and paragraphs are all part of an HTML domain.

SQL, or Structured Query Language, is a language that allows programmers to create queries and manage databases. It is designed mainly to manage data in RDBMS (relational database management system). Simply put, SQL can find and retrieve data from a database, as well as update, add, or delete records. SQL is a functional language, but usually works better with small databases.

C/C++ specialists are in demand among large IT companies such as Adobe, Oracle, Microsoft and Nvidia. C/C++ is a high-level programming language with support for several programming paradigms: object-oriented, general-purpose and procedural language. It is distributed in many areas, including competitive programming, graphical interface, software development and games.

Java is primarily a language used for server applications in large corporations. Java is especially commonly used in banks, insurance companies, retail chains, etc. For example, banks such as Deutsche Bank, Citigroup, Barclays and others use Java for back-end and front end. The Google+ server part is also written in Java.

PHP is a scripting programming language that was created to generate HTML pages on the side of a web server. PHP is one of the most common languages used in the field of web development. PHP is extremely simple for a beginner, but includes many advanced features for a professional programmer. Many well-known websites use PHP, such as Facebook, Wikipedia and WordPress. Laravel and Symfony are popular PHP frameworks.

C# is a universal, procedural, imperative general-purpose programming language. C had a great influence on other programming languages, especially C++, which was originally designed as an extension for C. This language is one of the most popular in the world, given the number of programmers who know it and the amount of software it writes available under free code licenses. In addition, C# is ideal for creating mobile applications and games.

Go (golang) is a compiled multithreaded programming language developed inside Google. The Go language was designed to create high-performance applications running on modern distributed systems and multi-core processors. The advantage of this language is that it avoids mistakes made by negligence, simplifies reading and understanding code, makes the code unambiguous. Go also has a simple syntax, something similar to C. It is used by companies such as Uber and Google.

Rust is a multifaceted compiled general-purpose programming language that combines functional and procedural programming paradigms with a typical object system. The language has strict typing and focuses on safe work with memory, ensuring high parallelism of tasks (the ability to perform thousands or even millions of subprocesses). It allows developers to work in different programming styles. In syntax, it is similar to C++.

We hope this article was useful to you:) If you are interested in programming, then we invite you to an internship at Israel IT. Here, you will gain all the necessary knowledge and skills to start a career in IT. 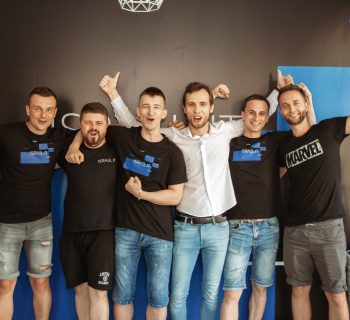